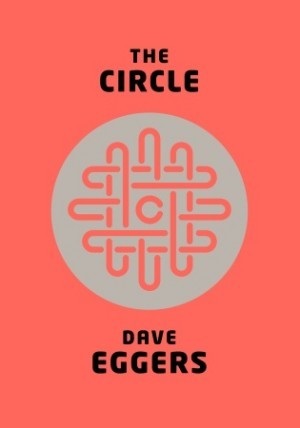 The dystopian novel is an interesting genre. Used well it gives an author a great opportunity to criticize society. The trick is to construct an alternative society, usually somewhere in the near or distant future, that somehow resembles our own, but with certain aspects slightly exaggerated. Famous examples include Aldous Huxley’s Brave new world, Yevgeny Zamyatin’s We, Anthony Burgess’ A clockwork orange and, of course, George Orwell’s 1984. More recently, Margaret Atwood has written a string of dystopian novels which many people have recommended to me. It’s good to know it’s not just British men who write these kind of books.

For Dave Eggers – a writer who has already shown many ways in which he’s criticized some of the wrongs in contemporary society – The circle is his first dystopian novel. It seems he has looked closely at 1984, since being seen and transparency are some of the most important themes in his book. The circle shows a dystopian society that is still being created, but not yet there. It is set almost entirely within the grounds of the Circle, the world’s most successful company and a fictive fusion of IT companies such as Google, Apple, Facebook and Twitter. The Circle’s ideal is that everybody will need only one account, called TruYou, for all of their everyday activities; social, such as watching and sharing photos, videos, messages or emails and otherwise, such as purchasing items online, arranging insurance, health care and even placing your vote. With your Circle account you can manage your whole life.

This is such a popular concept that the Circle is expanding on a massive scale, constantly hiring new people. Mae Holland can’t believe her luck; she will be one of the many thousand Circle employees. We follow Mae during her first days at the company. She is astounded by the level of energy and creativity on the Campus. Everywhere Circlers are working hard at devising more ways for people to share information, society to become more open, to make life a little easier. For diversion, but also to stimulate more creativity, there is a constant flow of games, parties, guest lectures and concerts on the Campus. Mae is thrilled and despite some hesitation joins the Circle’s irresistible rhythm of working, playing and sharing. To be as close to their work as possible many Circlers just use a room in one of the dorms on Campus to get a few hours sleep. Like all Circlers, Mae is expected to share all her thoughts with her friends and colleagues and to comment on theirs as well. This constant messaging, smiling and frowning is considered an essential part of her work. Mae’s life quickly becomes absorbed by the Circle, while the company’s quest for full transparency takes a sinister turn.

It is exciting to read The circle and at the same time it is awful. Eggers makes you a part of this treadmill, of this unstoppable process, as people are forced to join, to share everything, and always with a smile. He makes you think, feverishly, as the story rushes on. Of course we want access to information, optimal health care, child safety, less crime, transparent politics, but at what price? Given the right framing and the right social push it seems not so unlikely we would be willing to give up on our privacy to achieve all that and that is scary. Eggers has clearly felt that fear and wrote this story to make us feel it too. He sees what we are slowly moving towards, almost inevitably, and where things might go from there. They don’t have to, but they might. The circle is set only a few years from now. Its level of realism, of overlap with society as it is now, is sometimes uncanny. People ought to read this book and think for themselves how they would like the future to be, utopia or dystopia?