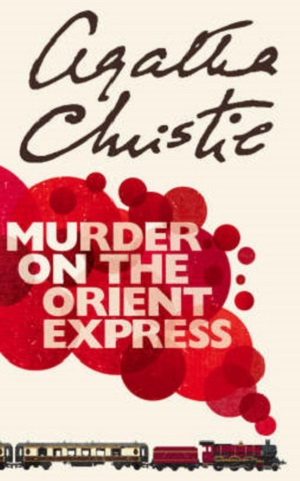 Murder on the Orient Express is the one Agatha Christie novel I always wanted to read. We came upon it in a Bulgarian bookshop and I immediately thought ‘this one is for me’. The book itself – featuring our favourite Belgian detective Hercule Poirot – is set completely on the renowned Orient Express, which happened to run from Istanbul to Calais, by way of Bulgaria and Yugoslavia and then further through Italy on to France. I was happy to find that the city where we’d just spent some time, Istanbul, was also the starting point of Murder on the Orient Express. While reading the book back in Holland, this released some happy memories.

The murder mystery is as follows: a man has been murdered on the train, during or immediately before the train is caught by a heavy snow storm and stuck somewhere in Yugoslavia for a while. Because of the obvious visibility of footsteps in the snow the murderer would have been unable to escape the train and must therefore be still on it. None of the passengers seems to be who they claim to be, but at the time of the murder they all have an alibi. Fortunately, Poirot is with them and he uses the time it takes for the train to be liberated from the snow to reach his own conclusions.

Agatha Christie doesn’t let the grass grow under your feet and I love her for that. You can always count on her to deliver a mystery full of twists and turns, all in the space of a pocket book of 300 pages or so. My last experience with a detective was unsatisfactory, especially because of that book’s interminable length. It may be impatience from my side, but that seems to be something Christie knew many of her readers to suffer from. So, scratch another Poirot from the list and, properly refreshed, we may move on to other literary grounds, until the time my craving for Agatha Christie comes again.