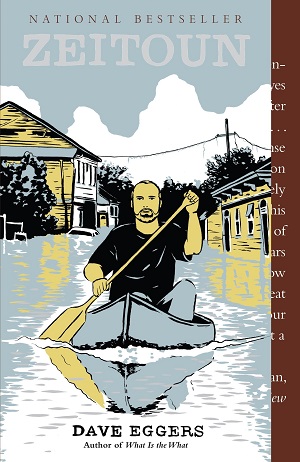 I live on an island, within the city of Amsterdam. In front and at the back there is water, and, when it rains, water is also on top. During a storm I sometimes imagine my house pulling free and floating away towards the North Sea, with me in it. This fantasy may also come from a childhood spent on a houseboat. Reading Zeitoun by Dave Eggers triggered quite a few water-related thoughts and memories.

In the beginning of 2006 I visited New Orleans. Hurricane Katrina had happened half a year before and was still visible everywhere. I stayed in an old house in the Garden District, on a street that seemed mostly uninhabited. In fact, the whole area was almost deserted. Only when you came to the centre of the city there was the normal level of noise; the tourists had returned, although a lot of residents hadn’t yet.

Zeitoun is an engaged book. Dave Eggers tells the story of Abdulrahman Zeitoun, a Syrian immigrant to the United States and longstanding resident of New Orleans. He married an American woman, built up a successful business and raised a family. When hurricane Katrina is about to hit Zeitoun’s family flees the city, but he stays to look after their property. In the flooded city he finds a purpose rescuing people and feeding trapped animals, using a canoe to paddle through the streets. The all too present authorities – tens of thousands men and women belonging to the police, National Guard, FBI and others quickly come to the area to establish law and order among the chaos – round up Zeitoun and three others, suspecting them of looting. The fact that two of them are Syrian and Muslim immediately makes them potential terrorists from Al Qaeda.

What follows is a frustrating episode where we get a peek on the dark side of the American justice system; Guantanamo and Abu Ghraib are not far away. Zeitoun gets locked up in a high-security prison, while his family doesn’t know what happened, where he is or whether he’s still alive. It all ends well finally and Zeitoun is reunited with his family. They pick up the pieces in a mostly destroyed New Orleans and manage to get their lives back on track. But the memories of this episode will forever leave them scarred.

It’s a good thing Dave Eggers wrote down their story. It’s American in an overly justified way – Zeitoun is portrayed as a hero and can’t do wrong – but it’s also honest. Eggers knows how to engage his readers and build up his book; Hollywood is looking over his shoulders. I’ve been meaning to read Eggers’ other famous book, What is the what, for some time now. This will take a little longer though, because reading that one immediately after Zeitoun seems too much.