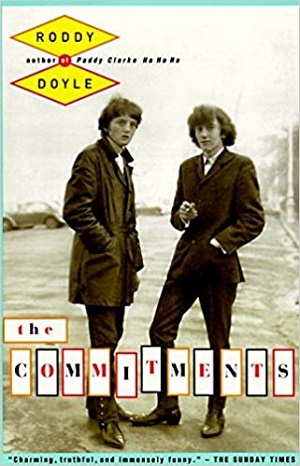 The rise and fall of a Dublin soul band called The Commitments. Deciding that Ireland lacks soul a group of working class kids form their own band, to bring soul to the people. An outlandish plan but, unexpectedly, a huge success. After many frustrating rehearsals and with a lot of help of their experienced trumpettist, Joey ‘the Lips’ Fagan, The Commitments start to swing.

With their fame, however, also comes disaster. The singer, never a likeable bloke, becomes unbearably arrogant, the saxophone player listens to jazz – the music of wankers, naturally, not soul at all – and when the three background singers one by one get caught snogging with Joey there is not much holding the band together anymore.

Manager Jimmy Rabbitte, the hero of the book, can only watch in despair as The Commitments explode on the brink of success. Such is the fate of many bands. Roddy Doyle catches all the defining moments in the ill-starred career of The Commitments. He wrote a book that is mostly dialogue, brilliantly capturing all the jokes and insults of the Irish working class. I didn’t count all the eejits, bollixes, Jaysises and shites, but the language certainly rings true.

So, do you like good music, sweet soul music? And you’re even prepared to read a book about it. Pick up Roddy Doyle’s The Commitments and sing along to James Brown, Sam Cooke and Wilson Pickett.

P.S. This book is already 25 years old. This year, though, Roddy Doyle has published a sequel to The Commitments called The Guts, with a middle-aged Jimmy Rabbitte trying to make it big once more. I’m curious about that one.