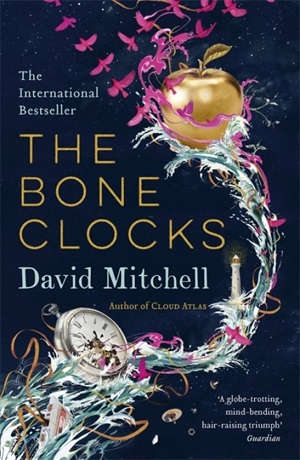 Astounding, what David Mitchell can put into one book. His new book, The bone clocks, contains six separate stories that only obliquely connect with each other. What connects them is the character Holly Sykes. She plays a part in all the stories, sometimes as the main character and sometimes in a side role. Holly is the key to getting through the labyrinth that is The bone clocks.

I write labyrinth, because underlying the bigger story is a fantasy subplot that stays well-buried for a long time. To go into detail would be spoiling the fun of reading, but the main idea is there’s a long-lasting struggle between good and evil, outside the view of ordinary people. It has to do with souls and time, death and reincarnation; quite interesting stuff really. Reading these scenes I even had an occasional Harry Potter association, something I hadn’t expected in a David Mitchell novel, but as a Potter-fan could appreciate.

These imaginative parts are juxtaposed with moments of highly descriptive realism. An undercover journalist during the 2004 Iraq invasion becomes the exciting point of view for a while. On the heels of this journalist a middle-aged writer suddenly takes centre-stage and we follow his failing struggle to write a book as brilliant as his debut. The confusion after a Baghdad suicide attack, or the powerplay behind the scenes of a literary festival, Mitchell masterfully describes it all.

His style of writing is why I read literature. He has such a grasp of language that he always uses the word you don’t expect. Cliché phrases he throws around to make them fresh again, for example changing the expression ‘the shit hits the fan’ into ‘Shit, meet Fan. Fan, this is Shit’ (p. 48). I constantly had a pencil ready to write down another unexpected reference or underline a funny sentence.

Stylistically, reading Mitchell is as always pure enjoyment. Structurally, this book was a bit of a struggle I must admit. I enjoyed the many stories in The bone clocks (Mitchell is great in telling a story within a story), I liked following Holly Sykes throughout the book and I was intrigued by the fantasy parts in between. Yet, as a whole I don’t know what to make of it, it doesn’t really glue together.

It is not Cloud atlas or The thousand autumns of Jacob de Zoet then, but it is the new David Mitchell. And reading a David Mitchell book is always a feast, whether we completely follow him or not.