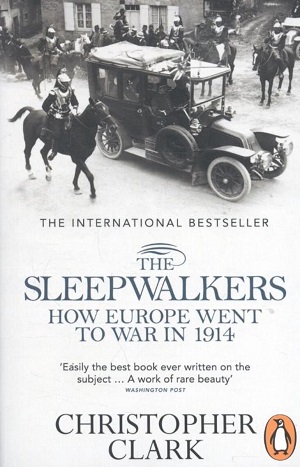 Of all the history books published around the centennial of the First World War The Sleepwalkers may well be the most sold. Many other First World War books take – logically enough – the actual war as their topic: the years 1914-1918, who fought who, how and where, who lost, who won. On the other hand, there is a big interest in the years immediately preceding 1914. Often, those years are seen as innocent and blissful, the calm before the storm. European culture was on a high wave, the arts and sciences flourished, nobody saw the catastrophe that was coming.
Christopher Clark, however, isn’t interested in the war years or the period leading up to the war, as such; his main topic is the five weeks between the assassination of Franz Ferdinand and his wife in Sarajevo and the declaration of war between the two great alliance blocks in Europe.

Clark focuses on the main decision-makers in the various countries involved: France, Russia, England, Serbia, Austria-Hungary and Germany. Who were they and what led them down the path to war? International relations could be trumped by the personal grudges and fears of an important individual who happened to be pulling the strings at the time. The Austrian military commander who was desperate not to seem unmanly in the eyes of the woman he was courting, the powerful English Foreign Secretary with a lifelong case of germanophobia or the French President’s obsession to appear decisive in front of France’s big ally Russia; their character traits played an important role in the decision-making process.

The dark horse in this tale is Serbia. Clark devotes a lot of attention to the Balkan peninsula – the boiling underbelly of Europe – and especially to the country whose illicit terrorist cells led the young Gavrilo Princip to assassinate Austria-Hungary’s emperor-to-be. With the regicide of the Serbian king, the formation of the underground society called the Black Hand and the mysterious figure Apis at the centre of it all, this part was the most exciting in the book.

The middle part, with its long exposé of Europe’s political situation on the eve of war, had its ups and downs. However interesting the material may be, some of these chapters took me long to digest. I put the book aside for a few months – something you of course should never do with a tough book such as this – but couldn’t abandon it altogether. People talk so much about this book, even get into heated arguments about it, it deserves to be read. Luckily, once Franz Ferdinand is actually shot the inevitable chain of events that follows – which wasn’t inevitable at the time! – creates such a momentum you can only read on, even though you know exactly what’s coming or, perhaps, because you know.