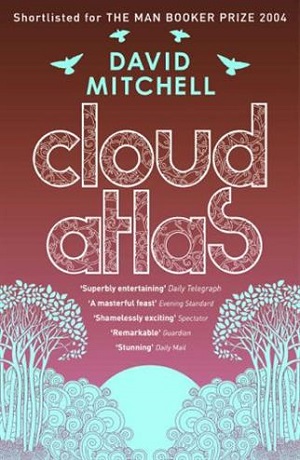 If we compare literature to a landscape I feel like I’ve just climbed Mont Blanc. Not quite the Himalayan heights of Ulysses or Remembrance of things past, but a rather challenging peak nonetheless. This week I spent reading Cloud atlas and I’m still a little out of breath. Around the time the movie version entered the cinemas I gave the book my first try and failed. It felt too complex and uninviting and I put it away after 15 pages or so. I realized this is not a book to be taken on too lightly. Lately, I’ve read some smaller books and discarded a few others, so I felt ready to try Cloud atlas once more. I started confidently and read on in three long bursts. Find the thread and follow it; don’t let go, because if you put it away too long you lose it.

A brilliant and challenging aspect is the language. Mitchell fits the language of each story to its time. Thus, not only do you have to get into a new story six times, you also have to adjust to a new style of language. The first, 19th century story takes some getting used to, the 20th century stories allow you some breathing space, but especially the fifth and sixth story are mind boggling at first. Compare it to coming first into the world of A clockwork orange. A strange setting, words that seem familiar in a way, but require you to give them meaning, not the other way around. The sixth story, the top of the pyramid so to say, may be about 80 pages, but I took almost a day to get through it. Once you get through there it starts going downhill again as you revisit the stories you discovered before.

Perhaps at this point I should also emphasize I enjoyed reading Cloud atlas a lot. The bigger the struggle, the bigger the reward, as I derived huge satisfaction from solving all the puzzles in this book. In the first part of the book all of the stories end with a cliff-hanger, so you can imagine the pleasurable sense of closure you get when you can finally continue these stories after a few hundred pages. As I mentioned already, there is a deeply buried thread connecting everything; rediscovering it again after having plodded along unwittingly for some time feels good.

David Mitchell has a lot of faith in his readers, because he doesn’t make anything easy. This is exactly what I like about him. He sets you to work, sharpens your mind and constantly provides exactly the right amount of plot tension; hugely rewarding and entertaining at the same time. I cannot even begin imagining writing such a book. Mitchell holds up many balls in the air and pulls it off, seemingly without effort. Every page is necessary, there are no redundant passages; for a 500+ page book it actually seems condensed. Reading such brilliant books makes you wonder why you would ever waste your time on anything of lesser value. On the other hand, I suppose you can’t go on reading masterpieces all the time.

Just to give a small taste of Mitchell’s writing I’ll write down a few quotes from the book, each from the beginning of a story:

p. 3
Beyond the Indian hamlet, upon a forlorn strand, I happened on a trail of recent footprints. Through rotting kelp, sea cocoanuts & bamboo, the tracks led me to their maker, a white man, his trowzers & Pea-jacket rolled up, sporting a kempt beard & an outsized Beaver, shovelling & sifting the cindery sand with a tea-spoon so intently that he noticed me only after I had hailed him from ten yards away.
The book’s first sentence. Notice the immediate focus on time, with the footprints. A reference to Robinson Crusoe as well.

p. 44
Labouring types surrounded me with bad teeth, parrot voices and unfounded optimism. Sobering to think how one accursed night of baccarat can alter a man’s social standing so irreversibly. Those shopworkers, cabbies and tradesmen had more ½ crowns and threepenny bits squirrelled away in their sour Stepney mattresses than I, Son of an Ecclesiastical somebody, can claim. Had a view of an alley: downtrodden scriveners hurtling by like demisemiquavers in a Beethovian allegro. Afrain of ‘em? No, I’m afraid of being one.
A bit of James Joyce, a bit of T.S. Eliot´s The wasteland. Bleakness from the Lost Generation, after the First World War.

p. 90
´My guru, Luisaaa, my guru! He´s on his last reincarnation before—’ Richard’s fingers go pufff! Nirvanawards. ‘Come to an audience. His waiting-list normally takes, like, for ever, but jade-ankh disciples get personal audiences on the same afternoon. Like, why go through college and shit when Maharajah Aja can, like, teach you everything about . . . It.’
Hippie-speak seems already slightly over the hill and wannabe cool. Must be the Seventies.

p. 153
Knuckle sandwich was actually a well-written gutsy fictional memoir. Culture-vultures discussed its socio-political subtexts first on late-night shows, then on breakfast TV. Neo-Nazis bought it for its generous lashings of violence. Worcestershire housewives bought it because it was a damn fine read. Homosexuals bought it out of tribal loyalty. It shifted ninety thousand, yes, ninety thousand copies in four months, and yes, I am still talking hardcover.
Nice satire on a crappy memoir turning into a bestseller. Not hard to picture that happening right about our time.

p. 187
It was a sealed dome about eighty metres across, a dinery owned by Papa Song Corp. Servers spend twelve working years without venturing outside this space, ever. The décor is starred and striped in reds, yellows and the rising sun. Its celcius is adjusted to Outside; warmer in winter, cooler in summer. Our dinery was on the minus ninth floor under Chongmye Plaza. Instead of windows, AdVs decorated the walls. Set into the eastern wall was the dinery elevator; the sole entrance and exit. North was the Seer’s office; west, his Aides’ room; south, the servers’ dormroom. Consumers’ hygieners were ingressed at north-east, south-east, south-west and north-west. The Hub sat in the centre.
The world of science fiction and dystopia, like Orwell’s 1984. Emotionless, functional language gives a good sense of the empty atmosphere.

p. 249
Adam, my bro, an’ Pa’n’me was trekkin’ back from Honokaa Market on miry roads with a busted cart-axle in draggly clothesies. Evenin’ catched us up early so we tented on the southly bank o’ Sloosha’s Crossin’, ’cos Waipio river was furyin’ with days o’ hard rain an’ swollen by a spring tide. Sloosha’s was friendsome ground tho’ marshy, no’un lived in the Waipio Valley ‘cept for a mil’yun birds, that’s why we didn’t camo our tent or pull-cart or nothin’. Pa sent me huntin’ for tinder’n’firewood while he’n’Adam tented up.
‘Clothesies’ immediately brings to mind Gollem. Set furthest in the future, this language sounds more like American frontier around 1850 or so, Huckleberry Finn style. A little bit like The road too.