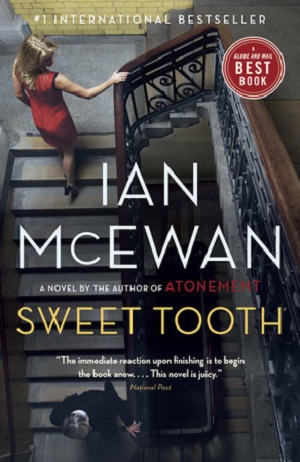 It’s not the new Ian McEwan anymore, but his 2012 novel Sweet tooth kept beckoning to me, irresistibly in the end. It came highly recommended at the time and I’d even tried out a chapter or two, although for some strange reason I put it aside again quickly. I tried Sweet tooth again in 2014 and this time around I couldn’t resist its charm. It’s a Cold War spy novel of the John le Carré school, but then also about books and writers. Quite a fortunate match actually. I was hooked from the first paragraph:

Young Serena Frome, in her final year at Cambridge, gets introduced into the spy game by one of her professors. While she tells her parents she has found a respectable job at the Department of Health and Social Security she secretly starts working for the British Security Service MI5. It’s the beginning of the Seventies and women are slowly but grudgingly accepted into the world of espionage. Serena gets a ‘soft’ assignment: she has to recruit a young British writer for a special propaganda program against the Soviets. Or, in other words, charm him into working for ‘our’ cause, unknowingly of course. At this task Serena succeeds quite admirably, in fact she and the writer (in whom we might recognize some aspects of the young Ian McEwan) quickly fall in love. Things start getting confused as Serena realizes she may have gone in too deep into this whole spy thing.

As could be expected McEwan twists his readers around a few times before he changes everything one last time at the end. It’s the sort of ending that changes your perspective on what you’ve just read considerably, a trick that can easily alienate a reader. Fortunately, it doesn’t alienate you, it charms you. Could you have seen this coming? You might have. Did I? Of course not. It’s all quite witty. This is why I read Ian McEwan: for his superbly understated style and the tight hold he has on his readers. Throughout his books he has you exactly where he wants you, a control I imagine many a thriller author will be jealous of. It makes for comfort reading on a literary level.

After some years without any Ian McEwan novel it felt good to be back. It turns out I just like everything he writes. That’s a comforting thought. Especially with a fresh McEwan in the shops right now, called The children act. I can’t wait for the paperback to come out.