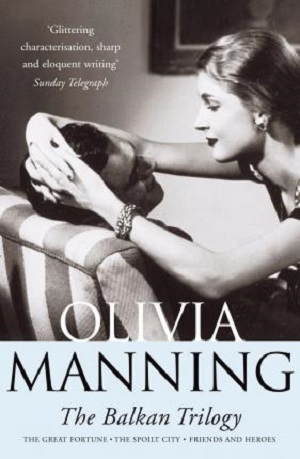 Olivia Manning, a young and aspiring British writer, falls in love at the end of the 1930’s. She’d met the highly energetic socialist R.D. (Reggie) Smith and marries him within weeks. Just before the outbreak of the Second World War Reggie is recalled to his post as British Council lecturer in Bucharest. The newly-married couple decide to travel together to Romania and settle there for a while. The War comes gradually closer, however, and after barely a year in Romania they are forced to flee to Greece. As the Germans move to invade Greece the Smiths manage to cross the Mediterranean and land in Egypt. The remainder of the War they will spend in Cairo and Jerusalem, where Reggie finds employment with the Palestinian Broadcasting Service.

Manning quickly decided she should turn her war experiences into a book. Despite making extensive notes and drafts during the whole period and having an excellent memory for recording every detail, it took her twenty years to come up with the right form. She abandoned the autobiographical form and decided to turn everything into one big ‘historical’ novel instead. Of this I’ve now read the first part, called The Balkan Trilogy.

We meet Guy and Harriet Pringle as they journey by train to Bucharest. They’ve recently married in England and after a quick honeymoon continue to Romania where Guy holds a job as an English lecturer. At first Harriet is thrilled at her new life in this strange city. In those days Bucharest had a decadent streak and the young couple, part of the well-respected British community, get invited to quite a few parties, dinners and luncheons where food and drink are lavishly available to all. At the same time beggars and cripples can be seen on every street, not too shy to cling to the skirts of a rich foreign lady to produce a few lei.

Harriet slowly gets to know the man she’s married. Guy, a man of limitless energy, feels best among a crowd of people and is always out making new friends. Most people love him for this. Marriage, to Guy, mostly means that Harriet ought to support her husband in all his activities, be a chum or a comrade to him. Not as naturally sociable, she’s bound to observe somewhat grudgingly from the sideline and is, more often than not, made to feel quite neglected.

In the meantime the War engulfs Europe and Romania is slowly invaded by a sense of doom. More and more people lean towards Germany for protection against the Soviet Union that has long since had its eye on the Romanian territories. The once-ridiculed Iron Guard, pro-German fascists, now march openly through the streets of Bucharest. When King Carol abdicates and the Iron Guard leader Antonescu takes control of the country the German army is expected to invade Romania any day. The remaining British citizens are forced to flee the country. Harriet boards a plane to Greece and a week later Guy joins her in Athens.

For a while a sense of bliss enters the Pringles’ lives again. Harriet quickly falls in love with the Greek people and really wants to make Athens their home. Their happiness is not meant to last long though. The War seems to follow them wherever they go. The Greeks have successfully defeated an invading Italian army, only to find Italy’s powerful ally Germany against them. It is only a matter of time before the German army marches across the Greek border. Once again the Pringles have to flee. They manage to board the last evacuation ship transporting the British colony towards Egypt, where Britain is still strong.

This is where The Balkan Trilogy leaves off, after more than a thousand pages. Almost two years have passed for Harriet and Guy after we’ve first met them. Manning has recorded all of their experiences in intensely detailed prose. While Harriet meets new sights and sounds a great cast of characters fills her life. Manning has a good eye for both. I can hear the gypsy flower sellers on the Bucharest street corners, smell the food stalls in Cişmigiu park and feel the arctic breeze blow through the wide şoseaua’s in winter. It’s great to read so much about pre-Communist Bucharest actually. It makes me want to pick up Mihail Sebastian’s journals again, who walked those same streets and even ate in the same restaurants if I’m not mistaken.

The Balkan Trilogy really is one of those books you can live in for a while. Because of its length and amount of detail my pace of reading fell down a few times, so in the end it took me almost two months to finish, but after spending so much time with one book I already miss it. Fortunately there’s a 1000-page sequel to The Balkan Trilogy, called The Levant Trilogy. It’s comforting to know I can read more about Guy and Harriet whenever I want, although I think I’ll leave them alone in Egypt for a little while.