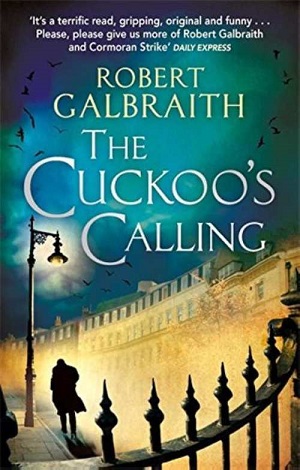 Last year around this time a book was published called A casual vacancy. Its author, a rather renowned writer of children’s books who longed for acceptation from older readers. The book, regrettably, didn’t meet anybody’s expectations, the writer’s, the publisher’s nor the readers’. This won’t do, the writer thought, I’ll be the laughing stock of the country if I carry on like this. Best try something different. What about a good old detective? Lots of uncritical readers, not so difficult to write, that might just do the trick. Best do it under a different name, though, to be on the safe side.

The result: The cuckoo’s calling by Robert Galbraith.
The verdict: an unforgivable bore, my copy of which I left unfinished somewhere in Istanbul. I sincerely hope another may enjoy this weak effort at a detective, because I didn’t. Stubbornly struggling on I managed to read three quarters of it. I kept hoping for some tension, but it never came. Of course I should have abandoned this book a lot earlier and simply start one of the other books I had with me. For some reason, however, I refused to give up hope. There must be something in there, I thought.

If pressed, I would still grudgingly admit she can write: she can create convincing characters, write catchy English and be humourous quite a few times. I occasionally chuckled. So, let me repeat, she can write, but not a detective. What good is a detective without a good plot? A joke without a punch line. The plot in The cuckoo’s calling is nonexistent, boring and leads nowhere. If by three quarters of the book your loyal reader abandons his efforts you’ve done something seriously wrong.

Poor writer and poor loyal readers, of which I’m sure she still has many. Our one support will always be that magical series of children’s books we know her from. They will last.