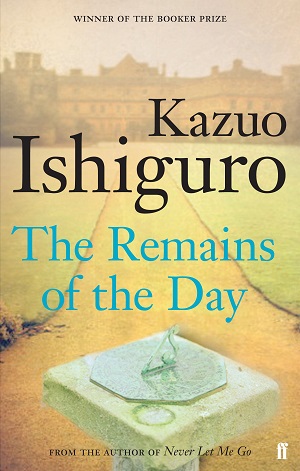 This book presents me with an interesting case. This has been the second time I’ve read The remains of the day; the first was eight years ago. Apart from the book, however, there’s also the famous movie, starring Anthony Hopkins and Emma Thompson. A movie which I’ve seen countless times. I can’t remember whether I’ve seen the movie before I initially read the book, but I cannot read The remains of the day anymore without seeing Anthony Hopkins in front of me. That is not a bad thing, I assure you. Hopkins’ performance as the Mr Stephens the butler is one of the best in his career, simply perfect. The rest of the movie is quite perfect as well.

Reading the book now for the second time inevitably resulted in endless comparisons with the movie. Mr Stephens the butler, who is also the narrator, is constantly arguing his case and asking himself questions. What does it mean to him to be a butler? What makes a good butler? Values such as loyalty and dignity he holds to the light, all the while worrying that he doesn’t explain himself sufficiently. Through his elaborations and clarifications the story unfolds, a story about an ageing butler travelling to see his old love one last time. She happens to be the housekeeper he used to work with for many years. She wanted, but he wouldn’t. His loyalty was always to his work, to his employer, Lord Darlington. ‘Dignity in keeping with one’s position’ says the butler’s credo. Tragic and beautiful the story, both in print and on screen.

Without doing the book any injustice, I hope, I hereby declare I prefer the movie. Regarding the author, Kazuo Ishiguro, I have to say that after his other masterpiece Never let me go I’ve never had any urge to read anything else by him. It might be he has another masterpiece in him, but I doubt it. It doesn’t matter, these two novels are enough. Both of them I’ve recommended to many people and I will continue to do so.