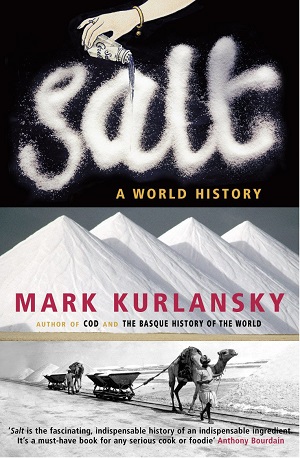 Salt is one of the most common products used in any kitchen. It is cheap and available almost anywhere on the planet. And yet for thousands of years people have struggled to get it, keep it and sell it. Fortunes could be made trading salt and wars have been fought over it. About these simple crystals Mark Kurlansky has written a book; an interesting, informative and, above all, entertaining book. Perhaps because Kurlansky is not a historian, but a journalist mostly interested in food.

A few years ago I already read one of Kurlansky’s books, called Cod. I remember being intrigued by the chapter on sea and fishing in Bill Bryson’s A short history of nearly everything. In this chapter Bryson often referred to Kurlansky’s work, leading me to Cod and, subsequently, to Salt. Kurlansky is a recipe enthusiast; in both books you can find dozens of historical recipes and especially in Salt, these can be rather old. From Rome to ancient China cooks have found ingenious ways of preserving and preparing their food with salt. The Romans, for example, never shy to experiment with exotic tastes, used to love something called garum, a sauce made of fermented fish. How did these people come by their salt though?

Kurlansky describes two basic ways of procuring salt: you can dig for it or you can evaporate water that contains salt (sea water or water from natural salt springs) either using solar energy or putting a fire under it. The water then disappears and the salt remains. This technical aspect of salt making is interesting, but things get even more interesting when the ones who have salt decide to trade with the ones who don’t. We go from the first salt taxes in Imperial China to the wages of Roman legionnaires being called salary, from the successful salt trade empires of Venice, Genoa and the Hanseatic League to the discovery of the huge trade potential of salted cod caught off the coast of Newfoundland. We learn that one of Gandhi’s first successful protests against the British involved scooping salt of a beach (thereby breaking the law that forbade any Indian at that time to harvest salt) and that the Northern American states won the civil war against the Southern states because they blocked the supply of salt to the South.

Only recently has the production of salt become so industrialized on a large scale that it is no longer necessary to spill any blood over it. Where it was once fashionable to use as much salt as you could afford, to show off and make your neighbours jealous, the current trend is exactly the opposite. Salt, regrettably perhaps, is no longer as interesting as it once was.