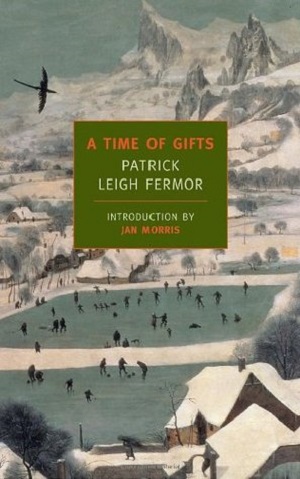 When he was 18 years old Patrick Leigh Fermor made a walking tour across Europe, in the early 1930’s. Crossing the North Sea on board a Dutch ship he started walking from Hoek van Holland and went all the way to Istanbul, carrying just a backpack and a walking stick. Forty years later he wrote two books about this journey, A time of gifts and Between the woods and the water. The second book, which largely takes place in Hungary and Romania, I’d already come across in Jaap Scholten’s Kameraad baron. Scholten, and many others before him, were intrigued and impressed by Leigh Fermor’s descriptions of Europe before the destruction of the Second World War and the rise of communism.

Leigh Fermor had chosen a perfect time for his walk. Traces of the old Europe, from before the First World War, could still be found everywhere and people were more than willing to tell tales about a seemingly more innocent time. The young Leigh Fermor must have been a charming, unimposing young man who, luckily enough, spoke some German and French. Wherever he went people put him up for the night without a fuss. Often, while walking, he got into conversation with farmers or huntsmen, who always managed to recommend him to acquaintances in a neighbouring village. Occasionally, he even ended up in a manor house, at the fireside of an ancient noble family who, fascinated by this young Englishmen’s quest, immediately announced all their friends along the route of his approach. Rather friendly times it seems.

The itinerary of A time of gifts follows the Rhine and the Danube, through Holland, Germany, Austria and Czechoslovakia, and ends with crossing the Danube into Hungary. Bigger cities such as Munich, Vienna and Prague call for longer descriptions, but Leigh Fermor seems most at ease out in the country. Cities offer friendship, culture, the occasional replenishment of a purse that seems to empty by itself, and of course warmth (rather masochistically, Leigh Fermor sets off on his journey in the middle of December and only after crossing half of snow-covered Europe does he come upon Spring in Hungary).

Walking alone, however, there is ample time to muse on history, language, literature and art, ideally in connection with a nearby castle, monastery or church. It is bemusing to read Leigh Fermor’s enthusiastic descriptions of an old monastery, with a lonely Dominican monk as his guide. The view, the light, the styles of construction, the patience of the builders, the boldness of the designer, the memory of a long-forgotten abbot or bishop; all put together can trigger a lyricism that can go on for pages. Amazing how much someone is able to see in one building. Leigh Fermor shows a huge interest both in culture and people and is, even at such a young age, already highly educated.

Clearly, you shouldn’t forget that what you read has been edited by the mature Patrick Leigh Fermor. Nevertheless, A time of gifts is interesting to read on a variety of levels: for the travelling, the time, the history and especially the language. It is not for nothing that these two books get mentioned so highly. Leigh Fermor really does write travel literature. If you turn a blind eye on his occasionally florid descriptions it is rather beautifully written, in a high British style. This means long sentences with many sub clauses that can be highly rewarding once you manage to find your way through them. My one complaint would concern the edition I read this book in, an otherwise nicely printed New York Review of Books Classic: if you do publish a classic travel book, do at least include a map!

I hope to read the sequel, Between the woods and the water, soon enough, especially because that part deals with Eastern Europe, the area that interests me most.