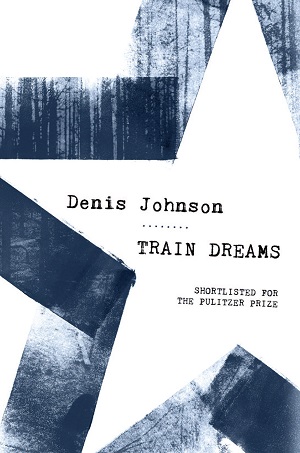 I understand why readers of Stoner often refer to Train dreams as another favourite. Both books tell the story of one man’s life; normal men leading normal lives: birth, marriage, children, work, death. They even have almost the same lifespan, from the end of the 19th century until around 1960. A calm narrative voice takes you by the hand, points out special moments in those lives; more downs than ups, as the average goes. But where Stoner smoothly goes from birth to death, Train dreams is more fragmentary.

Robert Grainier is a working man who earns his money in railroad construction, forest clearing and other contract jobs, wherever a pair of steady hands is needed. He gets a wife and child, builds a house, loses all of it, builds another house and spends the rest of his life alone. Denis Johnson doesn’t fill in all the gaps, nor does he proceed chronologically; he merely zooms in on a few scenes that stand out in Grainier’s life. The setting is the border country between Canada and America, the remote areas in the state of Idaho. The great outdoors, lonely men trying to survive, ground tread before by Ernest Hemingway and Jack London, echoing of Mark Twain and, more modern, David Vann.

Some scenes worked for me, some didn’t. Generally, the dialogue in the book distracted me; description was enough. The great fire that swept through the Idaho panhandle, groups of men doggedly tearing down spruce and pine trees, building a house with your bare hands (Walden!), wolves howling throughout a full moon night and the man howling with them: enough to savour and to go through slowly. I liked it and would have liked a little more.