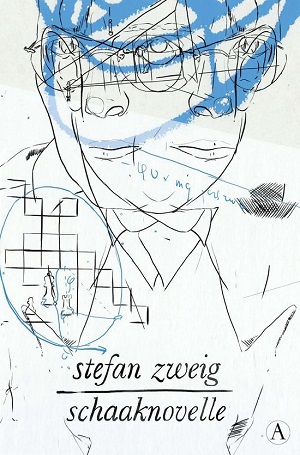 It’s an interesting game, chess. I’m not a good player, but I like watching other people play and quite enjoy reading about it too. The last few years I’ve read entertaining chess books by Dutch grandmasters Hans Ree and Jan Timman, as well as an excellent biography of Bobby Fischer, Frank Brady’s Endgame. Reading nonfiction books about chess is one thing, however, but reading a work of literary fiction in which chess plays an important role is quite another. I’d already read Lewis Carroll’s Through the looking glass some years ago, one of the classics in chess literature. Perhaps the ultimate classic is Stefan Zweig’s Chess Story, though, so this book had to be my next read.

If you’d ask me for a top five of novellas Chess Story would certainly be in it. It would be hard to find any flaws in this book, actually. Despite being written seventy years ago Chess Story reads smoothly; some of the details may be dated, but the language itself is exceptionally fresh, making it a timeless text. (My version is in Dutch, so credits also to translator Willem van Toorn, who helped make Zweig’s text so timeless.) There’s an exciting plot, involving a boat journey to Buenos Aires, two chess fanatics on board and an escape from the Gestapo. One of the chess fanatics taught himself how to play the game during his captivity by the Gestapo, somehow reminding me of Dantès in The count of Montecristo. He teaches himself chess by playing against himself, thereby splitting his personality. He needs to play to keep his sanity during captivity, but by playing he becomes insane: a perfect paradox.

I think Zweig hit the fascinating aspect of chess on the head with this story. This is not to say that all excellent chess players are necessarily insane, or even that you should cultivate your dark side to become a chess champion. I would say, however, that both chess fanatics in Chess Story show interesting aspects of the chess persona. If you look closely you might even recognize some real players, living or dead.
I suppose a worthy follow-up to Chess Story would be The Luzhin defense by Vladimir Nabokov. Perhaps more on that book in the future.