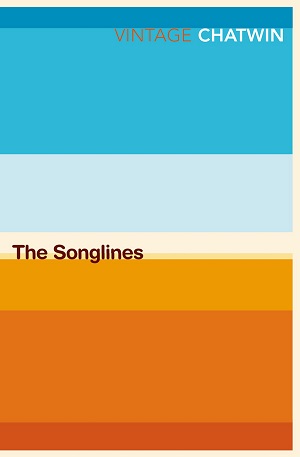 Today I spent reading Bruce Chatwin’s In Patagonia. As a prelude to that book’s report though I’d like to write something about my first Bruce Chatwin book, The songlines. I read The songlines in the beginning of this year and it made quite an impression. Originally a tip from one of L.’s professors, we’d run into a second-hand copy in Leiden and decided to take a chance. Bruce Chatwin is one of those huge names in travel literature, often referred to and quoted (on new Moleskine notebooks they even say something like ‘as used by Pablo Picasso, Ernest Hemingway and Bruce Chatwin’). As such things go, you develop a kind of awe for such writers that can easily prevent you from ever picking up one of their books. Fortunately, this writer’s reputation is well deserved.

I won’t say The songlines is an easy read. It’s loosely about Chatwin travelling into the interior of Australia to learn more about the mystical songlines. He learns that songlines are ancient markers that provide a sort of family connection for Aboriginal tribes. Each tribe has its own song, transmitted through generations. One Aboriginal living now can start to sing his tribe’s song and he will know which way to walk; the words are connected to specific landmarks, so you can sing and find your way across the continent. Often enough people will suddenly disappear for weeks on end tracing their songline: going ‘walkabout’.

Enterprising modern Australians threaten some of these ancient songlines by building highways and such. If the original landmarks are not in the same place anymore or not there at all the songline ceases to work. This is where Chatwin gets in. In the first part of the book he gets to know the people that try to help the Aboriginals. The Aboriginals themselves are often helpless against threats because of widespread alcoholism and passivity, so they are assisted by a mixed bunch of idealists.

Chatwin, however, seems more interested in the ancient idea of the songlines. In the second part of the book he suddenly switches to some of his older travel notes, but also starts quoting a number of writers and thinkers who said things about wandering in general. This is Chatwin’s real interest; why people have started to wander, throughout the ages. He sees himself as a wanderer – always restless, never happy to settle down – and feels a connection with all of these other restless spirits. The Aboriginals are just an example of this ancient human urge. For me, this is where The songlines really took off. Reading that second part gave me a thrill. I suppose there is in everyone still something left of the wanderer. Maybe this is nonsense, but it did speak to me. I haven’t burned my ships and taken to travelling the world since then, but the idea that you always could is comforting.