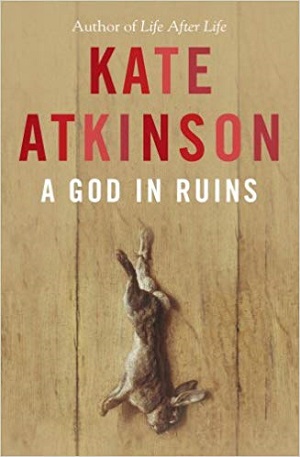 Kate Atkinson’s latest, A god in ruins, takes off where her last novel, Life after life, ends. It is not really a sequel though, more a companion piece. Where Life after life was about Ursula Todd, A god in ruins centres on her younger brother Teddy. In most versions of Ursula’s story Teddy dies young, serving as a bomber pilot in the Second World War. Atkinson didn’t devote a lot of attention to Teddy in Life after life, but must have felt sorry for throwing away a perfectly interesting character. And so, two years later she returns with a novel that explores Teddy’s life had he lived to survive the war and start his own family.

If the war was the focal point in Life after life – all of Ursula’s life seemed to move towards that climax – in A god in ruins it is the basis upon which the rest of the book is built. Teddy’s experience as a pilot flying on dangerous bombing missions over Germany marks the rest of his life. Everything that comes after must be dull in comparison. Atkinson not only manages to portray the thrill and excitement of flying, but also delivers a powerful punch when she describes the horrific side of the war in the skies. Aircraft exploding in mid-air or falling from the sky like burning comets, friends and comrades suddenly ripped from your team, the guilt of surviving when so few do. Not to mention the slow realisation after the war, when the devastating effects of those air raids start to become apparent to the ones who threw the bombs.

As the rest of Teddy’s life can never live up to the excitement of his war, nor can the rest of the book, unfortunately. His long-awaited daughter Viola becomes an important character. A spectacularly unsuccessful mother and a cranky middle-aged woman later on, Viola is quite interesting to follow. On her own she can’t compensate for Teddy’s dullness as an older man though. Too good to be true, caring for his wife and grandchildren when he has to, bickering with Viola the rest of the time. I didn’t see the point in telling us all this about Teddy.
Atkinson made me laugh quite a few times and I did enjoy reading about Viola as a wicked character, but while reading through most of A god in ruins I was hoping for the spark that I had found throughout Life after life. It may be that the first decades of last century are just more interesting to read about than what came after. But no, rubbish. A god in ruins simply doesn’t reach the same level as Life after life and shall be remembered as an entertaining summer read.