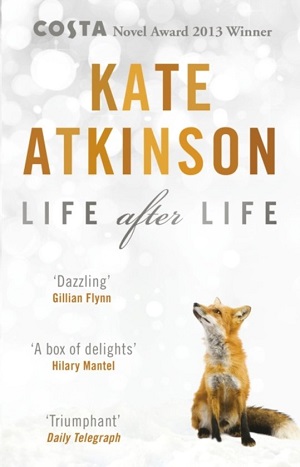 Ian McEwan’s Atonement ends with an unlikely scene: Cecilia and Robbie live together in a small London apartment. They have both survived the war and have found each other once more. A happy-ever-after you know cannot be true after what you’ve read previously. But it is possible, if only…

In Life after life Kate Atkinson constructs a whole book around this question, what if? What if we were sometimes given a second chance? Would we do things differently or make the same mistakes all over again? This is an interesting philosophical question, but difficult to base an entire novel on. Kate Atkinson has taken up this challenge nonetheless and succeeded admirably. Life after life is a smart and highly entertaining book. How did she do that?

To start with, Atkinson seems to have the careless, come-what-may attitude needed to even start such a novel. Her character Ursula can die and come back to life, simple as that. She can’t just step back on stage and rejoin the previous scene though, she needs to start all over again as a baby. The thing is, she doesn’t know this herself! She grows up once again, with only a vague, ghost-like sense of her previous, parallel life. Sometimes when Ursula comes into a dangerous situation she gets a premonition, a strong intuitive feeling that danger lies ahead and she should take an alternative road. She can’t explain these premonitions, but she learns to listen to them. If she can positively affect her own future, perhaps she can do so for others as well?

The story is, inevitably I suppose, not told in chronological order. We follow Ursula from her birth in 1910 until the end of the Second World War, but the years in between get a little tossed around. Her childhood in the English countryside is the base, the place to which we always return. The things that happen in the 1920’s, 1930’s and 1940’s are less certain and depend on Ursula’s choices. Sometimes she rescues people from bombed houses during the London Blitz, sometimes she is among the unexpecting residents being bombed themselves. She may get married at a young age, but she may also choose the career of a smart, unmarried civil servant.

Different choices, different lives. I really like the playful way in which Atkinson shows our destinies are not fixed. One tiny difference can alter the course of your entire life. What people you become friends with, who you fall in love with, where you will live, work or even fight; everything is possible. Even though we will all only lead our one life, those choices are there. There are thousands of parallel lives running around you, all potentially you, but only one will actually be you. Of course, this is not a groundbreaking insight, but reading Life after life made me realize it and that’s a marvelous thing.

Does this all sound like an overly complex, weirdly fantastical book? It is definitely not. My explanation of Life after life may be; this is a difficult book to write about, but not to read. Atkinson is a prime example of brisk British writing: crisp, snappy sentences, witty asides and a desire to, above all, entertain. No fuss, just a good book. Don’t we all love that?

Incidentally, I came across Life after life more or less by accident. Started reading and didn’t want to stop. This version of me will certainly try and look out for more Kate Atkinsons in the future.