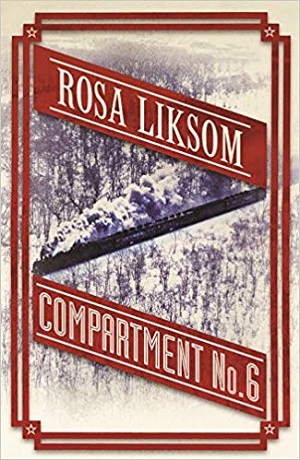 From Ponte de Barca we followed the Rio Lima to the northeast. At the border with Spain the river cuts through the huge Parque Nacional de Peneda-Gerês. We stayed in a little house overlooking the castle of Lindoso, surrounded by a field of espigueiros, stone granaries that give you a slightly eerie feeling – perhaps it’s the crosses on top that remind you of a graveyard. Every morning our landlady Maria hung a bag of fresh breads at the door. The rest of the day was for hiking and reading.

Here I started my second book of the holiday, Compartment No. 6 by Rosa Liksom. A different book L. had chosen to take, along with John Berger’s To the wedding. It’s a travel story, but a quirky one: a young Finnish girl travels on the Trans Siberia Express from Moscow to Ulan Bator in Mongolia. The book is almost completely set on this train, in the girl’s compartment no. 6. She shares this compartment with one man and their dialogue forms most of the action. Monologue might be a better word though, as the man does most of the talking. The man is of the male chauvinist pig type, a foul-mouthed middle aged Russian who, before he has introduced himself as Vadim Nikolayevich Ivanov, drily remarks to the girl ‘So it’s just the two of us. The shining rails carrying us to God’s refrigerator’ (p. 3).

The girl is in for a long ride. The man just begins talking, about his past sexual conquests, about his rotten marriage, about former jobs, army life, the state of Russia (it’s the 1980’s, so we’re still in the USSR), fights and booze-ups. Things get wilder and dirtier as the man drinks more of the wodka he has brought along, until he passes out. This is more or less the cycle of the interactions in compartment no. 6. The girl hardly speaks; she observes. Sometimes what she sees through the window is as ugly as the man’s stories – grey cities, generic building blocks, crumbling industry, dilapidated village huts – and sometimes it is beautiful. The harsh beauty of the Russian countryside, lots of snow and lots of trees, serves as a welcome contrast.

Interestingly, and enhancing the play-like feel of the book, we don’t get to know what the girl thinks. We read what she sees, hears and smells, but we never enter her thoughts. An occasional flashbacks helps to form a picture of her; her relationship in Moscow has gone sour and this train trip might be an escape from that. This narrative structure – all dialogue and observation, no psychology – makes it a cold-blooded book; almost like the author has wiggled a glass jar with snow and a moving train in it and is peering through one of the train windows to see what’s going on inside.

By the time the train reaches Mongolia we left the mountains behind, our car too, and found ourselves back in Lisbon. The city was getting ready for the match between Brazil and Cameroon. It was time I finished this wintery tale and rejoin the Portuguese summer.