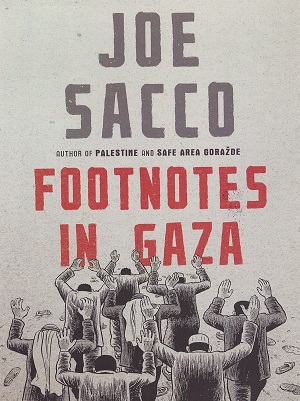 About a year ago Joe Sacco impressed me with Safe area Goražde, a stark report from a Bosnian town during the Yugoslavian war of the 1990’s. Sacco showed he has an eye for things the world refuses to see and the skills to draw them, producing comic book journalism of high quality.

His quest for the oppressed has led him on to Israel. Sacco is clearly fascinated by the violent pressure cooker that is Palestine and the never-ending struggle between the Israelis and Palestinians. He comes upon a deeply buried case of more than fifty years ago and travels around the Gaza Strip to investigate. During the 1956 Suez Canal crisis Israeli troops are said to have conducted two massacres in Palestinian towns, killing hundreds of civilians. Official records of the time treat the incidents as minor disturbances, footnotes in the greater scope of history, and no investigation has ever been conducted.

Sacco tries to reconstruct the events of those days as objectively as possible, trying to find every eyewitness still alive to tell their story. Cross referencing all those eyewitness accounts, sifting the truth from stories that often differ slightly from each other; it is a long time ago, but such events are not easily forgotten. With the help of photo material from archives Sacco brings the gruesome events of those days back to life, all the while being constantly disturbed by the current disturbances in the area. Israelis bulldozing Palestinian houses on a large scale, looking for militants and insurgents, but in effect making many ordinary Palestinians homeless. In this highly stressful climate Sacco and his friend and interpreter Abed are often shouted at by the younger people whose homes they enter. What are they doing digging up dirt from so long ago, while contemporary events are demanding everyone’s attention?

Fortunately, Sacco persisted and managed to piece together almost the whole story, including some Israeli accounts that hint at the truth of things. His point is valid enough and gets stated somewhere in the beginning of the book, when an old Palestinian remarks that the hatred that is visible all around was planted into people’s hearts long ago. It is relevant to the current situation to understand how it used to be, or at least how it probably went.