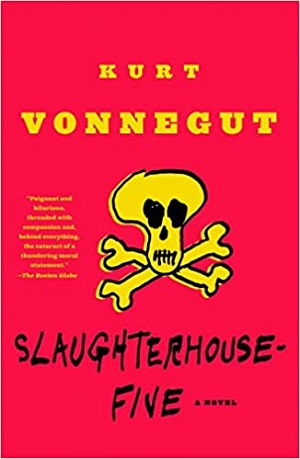 With Slaughterhouse 5 Kurt Vonnegut wrote the right book at exactly the right time. It is an anti-war book and a quirky one at that, managing to convey its message while being funny at the same time. Published in 1969 it found a reading audience protesting against the ongoing war in Vietnam. Although Vonnegut was writing about an older war, the Second World War, he did so in such a witty, modern way that his book must have tuned perfectly with the minds of that time.

Slaughterhouse 5 is about the difficulty of writing an anti-war book. Talking to his publisher the narrator admits:

It is so short and jumbled and jangled, Sam, because there is nothing intelligent to say about a massacre. Everybody is supposed to be dead, to never say anything or want anything ever again. Everything is supposed to be very quiet after a massacre, and it always is, except for the birds. And what do the birds say? All there is to say about a massacre, things like Poo-tee-weet?’ (p. 16)

That massacre is the bombing of Dresden, a moment of apocalypse that forms the heart of the story. Vonnegut, however, does not go straight to the point. Instead, he chooses a mixed narrative, a patchwork if you will, in which his hero, Billy Pilgrim, is constantly coming ‘unstuck in time’. A deliciously pulpy science fiction plot explains Billy’s ability to travel through time and allows Vonnegut to switch back and forth through his story. Billy Pilgrim – a brilliant name for a modern Everyman and a nice echo of John Bunyan’s classic The Pilgrim’s progress – often has moments where he just fades out and finds himself in another time, quite to his own surprise, and because of this he often seems dreamy and unfocused. This dreaminess, these seemingly random time switches might be the ideal way to weave the Dresden massacre into the bigger story; for Billy the bombing is like a nightmare, a bad dream he occasionally revisits, and that is a surprisingly good description.

While watching a war movie on television Billy suddenly has the sensation he can see things backwards. This scene, a simple but effective idea of Vonnegut, should be read in full:

American planes, full of holes and wounded men and corpses took off backwards from an airfield in England. Over France, a few German fighter planes flew at them backwards, sucked bullets and shell fragments from some of the planes and crewmen. They did the same for the wrecked American bombers on the ground, and those planes flew up backwards to join the formation.

The formation flew backwards over a German city that was in flames. The bombers opened their bomb bay doors, exerted a miraculous magnetism which shrunk the fires, gathered them into cylindrical steel containers, and lifted the containers into the bellies of the planes. The containers were stored neatly in the racks. The Germans below had miraculous devices of their own, which were long steel tubes. They used them to suck more fragments from the crewmen and planes. (p. 60, 61)

To make jokes in a book about war might, by some people, be considered bad taste, but I find it rather effective. Gallows humour may help in bearing the unbearable and, in Vonnegut’s case, humour seems the only way to tell this story with. Not to laugh at terrible things, but creating a new way of telling such a story, mixing high and low, the serious and the comical. Vonnegut deliberately uses other texts to construct his own. When, for example, he refers to Céline’s Journey to the end of the night and Stephen Crane’s The red badge of courage he places himself in a continuous tradition of authors writing about the horrors of war. For comical effect – and presumably to make the point that the bawdry and the dirty are as important as the literary and cultural – Vonnegut uses limericks such as:

There was a young man from Stamboul,
Who soliloquized thus to his tool:
‘You took all my wealth
And now you ruined my health,
And now you won’t pee, you old fool.’ (p. 2)

Slaughterhouse 5 is seen by many as Kurt Vonnegut’s masterpiece and understandably so. Whether or not I have read the best he has to offer – meaning that all else will be lesser in comparison – I shall have to discover. There are certainly a few other famous titles among his books.