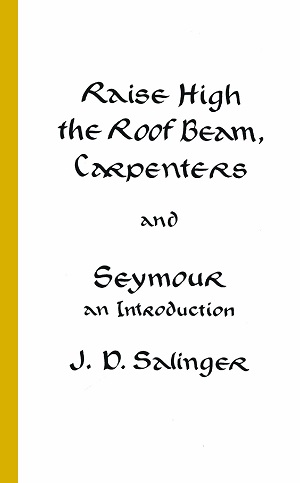 A strange cat, this J.D. Salinger. Notorious recluse and author of a small, but highly acclaimed body of work. Perpetually famous for, of course, The catcher in the rye, his only novel. Slightly less known, but at least as good, is his short story collection Nine stories. Then there’s two other books that each hold two novellas. Franny and Zooey I’ve yet to read and plan to soon. Darkest horse among them though is the duo Raise high the roof beam, carpenters and Seymour: An introduction.

Salinger often writes about the Glass family, especially the seven Glass children. Raise high the roof beam, carpenters and Seymour: An introduction are about the eldest two Glass children: Buddy, who is the narrator, and Seymour – who you might remember from that brilliant story ‘A perfect day for bananafish’.

Raise high the roof beam, carpenters is about Seymour’s wedding day. The night before the wedding Seymour gets cold feet and goes to see his sweetheart to call everything off. The next day Buddy finds himself at the reception, unaware of anything and surrounded by friends and family of the bride. He is the only representative of the groom, who turns out to have disappeared. The part where Buddy has to share a taxi with the fuming ‘Matron of Honor’ and her husband, afraid to confess that he is in fact the brother of the awful groom is superb. Salinger masterfully portrays Buddy’s confusion, but especially that overbearing, frustrated ‘Matron of Honor’, who seems only able to utter acid remarks like ‘I’d like to get my hands on him for about two minutes. Just two minutes, that’s all.’ (p. 19) Spot on, the way Salinger makes people speak who think they’re something.

Confusingly enough, the second part of the book, Seymour an introduction, is a total failure. I would actually recommend skipping it. Buddy is set to write a book about his older brother Seymour, but instead writes an introduction that never ends. I was constantly wondering when he is going to get to the point, but there is no point. The text is an endless, all-over-the-place, occasionally funny monologue, mostly consisting of asides to asides and remarks between brackets, resulting in an unfocused and quite boring mishmash.

An intriguing book: very good and very bad simultaneously. Fitting for a writer you can’t put your finger on. By now I’ve read three quarters of Salinger’s work, only Franny and Zooey remains. But who knows how many as yet unpublished works might still see the light of day? Salinger himself cannot guard them anymore.