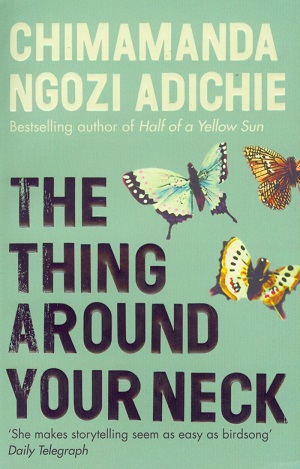 Short story collections are ideal to read alongside other, bigger books. Whenever an empty half hour presents itself you can squeeze in a quick short story. I planned to go slowly with The thing around your neck as well, but as soon as I finished the first story I wanted to go on. From outbursts of sudden violence in Nigeria to domestic drama in the United States, Adichie makes it all come alive. Her narration is warm and gentle and, although a lot of gruesome things happen to them, she is very sympathetic to her characters. She portrays sensitive people who try to keep control of their lives. They usually face an external threat that creates both the action in the story and the reader’s immediate sympathy for the main character. Each story works that way from the first page; after a few paragraphs you feel involved and curious.

“Cell one”, “A private experience”, “Jumping monkey hill” and “The headstrong historian” are the strong stories in this collection, but the title story and “The American embassy” stand out especially. “The American embassy” I’d already come across in the Dutch anthology of modern city stories Naar de stad; its quality the reason I wanted to try a whole collection of Adichie’s stories.

The title story portrays the alienation a young immigrant feels as she struggles to find her place in the promised land of opportunity, America. She finds a boyfriend and slowly settles in, but when she contacts her family after a few months it turns out her father has died in the meantime. Suddenly realizing her new life in America didn’t feel right all along she boards a plane back home, probably never to return. After being impressed by her novel Half of a yellow sun already, The thing around your neck again showed Adichie’s excellent writing. I can’t wait for her new book Americanah to come out.