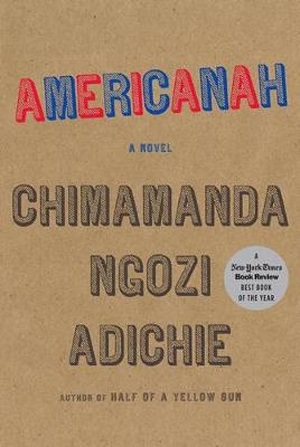 My whole life I’ve lived within twenty kilometres of where I was born. The city of Amsterdam is my habitat. And yet, through family both living and dead I can trace lines all over the world, to Central and Eastern Europe, to the United States, New Zealand and Indonesia. These lines are drawn through immigration, by Dutch people moving out of their country or others leaving home to eventually become Dutch. I expect you’ll find immigration in most family histories. It has always been there.

Immigration is also the topic of Chimamanda Ngozi Adichie’s latest novel Americanah. It is a love story that’s disrupted by immigration and picked up years later. Ifemelu and Obinze fall in love as young students in Nigeria, but because opportunities are scarce in their country they both seek their luck elsewhere; Ifemelu in the United States and Obinze in England. While they struggle with their life in a new country they lose contact with each other, despite their best intentions. Adichie expertly shows the many ways you can both fail and succeed as an immigrant. Immigration, however, is but one side of the coin. What happens when you return?

Ifemelu returns to Nigeria many years after Obinze, who turns out to have become a successful businessman. Her old friends call Ifemelu an Americanah and tease her dependence on American luxuries such as air conditioning. At least she hasn’t become a vegetarian! Can she still live in the noise, heat and crowdedness of Lagos or will she become one of those returnees who forever bemoan the state of Nigeria? Inevitably, Obinze and Ifemelu run into each other and their deeply buried love resurfaces. Whether Americanah has a happy or a sad ending you should find out for yourself, but like everything I’ve read so far by Adichie this one comes highly recommended.