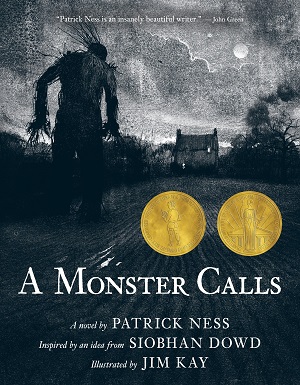 A sleepless night, it seems the perfect time to write about this book. 13-year-old Conor lies awake too when this story starts. It’s the middle of the night and he’s just woken up after a nightmare. His mum is ill and Conor has had too many nightmares lately. He’s fed up with them. It’s seven minutes past midnight, the witching hour, when he hears a loud voice in his room. It seems there’s a giant monster outside his window. A monster that looks a lot like the yew tree in his back garden, incidentally.

Big and scary it may look, it is a friendly monster (déjà vu, déjà vu, what was it? Ah, of course, one of my childhood favourites, Roald Dahl’s BFG, who else?). It wants something from Conor. It wants to know how Conor’s nightmare ends, the one he’s been having almost every night. Conor does not want to tell though, absolutely not; it would undo him. But the monster is not so easily put off and promises to come by every night until Conor is ready. Meanwhile the monster will tell three stories, three stories that are supposed to convince Conor to tell his own story.

A monster calls wouldn’t be half as good without the beautiful black-and-white illustrations that accompany it. Big and looming, dreamy and searching, they give a depth and closeness to Conor’s story that otherwise would seem mere allegory. Conor’s daily life also helps to bring the whole setting into our world and out of our nightmares. His mum’s illness that seems to get worse instead of better, his struggle at school and his absent father who ran off to America. Life is already difficult enough for Conor without monsters at his window.

How our life can creep into our dreams and how our imagination can seem more real than actual reality. A monster calls is an impressive story about the power of imagination against our fears and anxieties. Patrick Ness finished an original idea by Siobhan Dowd, who died of cancer before she could write this book. With the help of illustrator Jim Kay Ness created a memorable work of art that could appeal to anyone older than fifteen years or so. Anyone who can still remember the nightmares he had as a child.