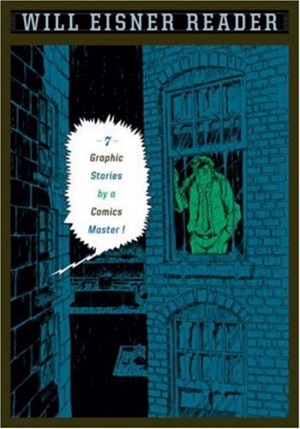 This book was a gift, by a friend who loves graphic novels. We had a long conversation about famous authors of graphic novels, the ones he likes and the ones I like. One author he likes and I didn’t know about was Will Eisner. The next time I saw him he presented me with a copy of a graphic novel; he had a double. It was called the Will Eisner Reader, containing ‘7 graphic stories by a comics master’.

My experience with graphic novels so far has always been with long works like Maus, Persepolis, and Safe area Goraźde, so it was interesting to see how this art form would hold up with shorter stories. Eisner has his own style, realistic black-and-white, with a feeling for people’s expressions. You’re inside characters heads, experiencing thoughts and flashbacks, while the actual story runs on. My friend told me that Eisner was in fact the first artist to go beyond comics to the more serious genre of the graphic novel (back when that name didn’t exist yet).

New York City is a fixture for Eisner. The best and longest story, ‘A sunset in Sunshine City’, is about a shopkeeper from New York who retires from the bleak north to sunny Florida, among the pensionados. Its main character reminded me of the shopkeeper from that nice movie Smoke, written by Paul Auster. Another good story portrays an 82 year old hitman so intent on finally fulfilling a contract that he gets a heart attack and is buried by the one he was supposed to kill.

Humour is important, as is nostalgia for New York in the 1930’s (when Eisner grew up). The poverty, gangsters and close-knit communities from those days are juxtaposed with the wealth, boredom and individualism of our times. Eisner offers escapism with good yarns from the good ol’ days. I’m usually a sucker for such romantic escapism, so I think I will like more from Will Eisner in the future. This was a good gift, then, more so for the fact that it smells strongly like the pipe tobacco my friend smokes.