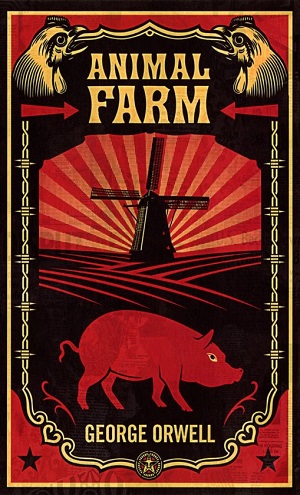 George Orwell is a steady fixture among my favourite authors, ever since I started reading English books. Slowly, I’m working my way through his oeuvre, trying to read an Orwell every few years. The last one, Keep the aspidistra flying, an interesting novel about a bookseller, was quite some time ago already, so I started getting a little anxious. The simplest solution in this case was to pick up an old favourite once more, Animal farm, a delightful, easy book that will probably get better every time I open it.

The story had sufficiently escaped my mind to be fresh to the touch; it’s been about ten years ago, no shame I’d say. The unhappy animals who throw out their human owner from the farm, their idealistic beginnings of self government, the growing influence of the pigs over the other animals, the dictatorship of the pig-leader Napoleon and his henchmen and the eventual bleak fate for the once idyllic Animal Farm; it was all still there, fascinating and depressing. All revolutions indeed turn upon themselves, a mimicry of their original ideals. To quote a famous Bob Dylan song: ‘Don’t follow leaders / watch the parkin’ meters’.

Additionally, whenever I write I try to think of Orwell’s six rules for clear writing, from his essay ‘Politics and the English Language’ in Shooting an elephant and other essays:

I’m not sure if I should put these rules on the wall over my desk, but it certainly doesn’t hurt to repeat them once in a while.