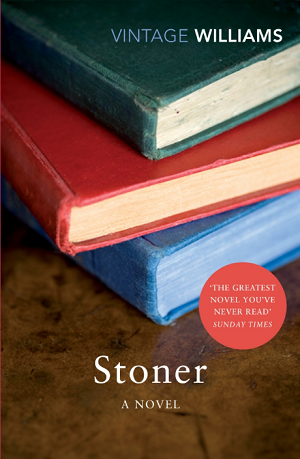 Every now and then an all but forgotten classic is rediscovered. I imagine this idea of a forgotten classic attracts people for two reasons: it’s a classic, which means it has already proved its worth at some point in time and, being forgotten, it holds the underdog position, allowing us the opportunity to reclaim its well-deserved popularity. The most recent example is Stoner, by John Williams, originally published in 1965. A Dutch publisher issued a translation that has recently hit the bestseller lists in Holland. A remarkable feat, since it is a rather depressing book. Although, I think I immediately have to correct that; it only seems rather depressing.

Stoner tells the story of a university professor called William Stoner. Coming from humble origins he manages to get into a university and never leaves. Upon graduation he takes on a teaching position, which he will occupy until his death. Meanwhile he stumbles into an ill-chosen marriage, gets one daughter and has one short-lived affair. In all appearances Stoner leads an unremarkable life. Williams emphasizes this in the first paragraph, by saying “Stoner’s colleagues, who held him in no particular esteem when he was alive, speak of him rarely now; to the older ones, his name is a reminder of the end that awaits them all, and to the younger ones it is merely a sound which evokes no sense of the past and no identity with which they can associate themselves or their careers”. The remainder of the book, however, proofs otherwise.

Throughout, Williams tells his story with dry, business-like sentences, like the one just quoted, but with these he draws a warm and loving portrait of an average life. Most of Stoner’s hopes and dreams don’t get fulfilled. He becomes a teacher, something he is passionate about, and stays a teacher. For him, ultimately, that is enough. And we have to conclude that as well, because in the end it is not about material gain, but about pursuing your passion. This is not to say that Stoner is moralistic; it is not. It’s simply a slice of life, a monument for a normal man (forgive me, I seem to find only clichés to describe this book).

Often enough, I was reminded of Vladimir Nabokov’s Pnin, another story of a hapless university professor. But, where Nabokov stays more on a comic level (something, I admit, he is very good at, with all his mastery of the English language), Williams goes deeper. I think Stoner is the better book.
I am convinced there are always such forgotten classics waiting for new readers. As long as there are publishers brave enough to keep publishing them we shall have nothing to worry about.