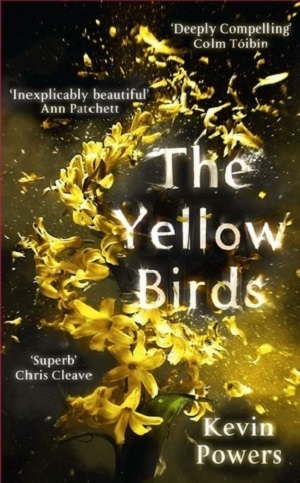 When Karl Marlantes published Matterhorn a few years ago the Vietnam war was already over for more than thirty years. Now there’s a novel about the Iraq war by a young American, written quickly after that war came to an end. That must be difficult. Like Karl Marlantes, Kevin Powers is himself a veteran, the best people to write such books I suppose. Making a fictional story about your war experiences ultimately works better than writing a memoir, but it must also be harder. That’s why I think it’s pretty remarkable Kevin Powers wrote such a powerful and mature novel so quickly afterwards.

The yellow birds switches between the actual scenes of war in Iraq and the aftermath of a veteran back home. John Bartle, the young soldier we follow throughout the book, is clearly traumatized. The way he wanders aimlessly around his hometown, more in touch with nature than with other people, reminds me of Hemingway’s early stories, as well as Salinger’s. Descriptions are beautiful, but at the same time you sense a huge underlying sadness; a total lack of purpose, because what does anything matter after such horrors?

Some of the things that happen in Iraq are hard to follow, both for the reader and for the common soldier. Not knowing exactly where you are and why you’re doing what you’re doing (shooting people because you’re ordered to) must be as alienating as this. Powers uses a dreamy style, focusing on the light, the smells, the sounds, the dust everywhere. All senses work, only reason falls behind.

“I’d been trained to think war was the great unifier, that it brought people closer together than any other activity on earth. Bullshit. War is the great maker of solipsists: how are you going to save my life today? Dying would be one way. If you die, it becomes more likely that I will not. You’re nothing, that’s the secret: a uniform in a sea of numbers, a number in a sea of dust.” (p. 12)

The yellow birds is not a big book; it’s not a plot-driven thriller like Matterhorn. Instead it’s more about atmosphere. You should take your time to digest Powers’ language. I’m curious about one thing though: what will Kevin Powers write after this?